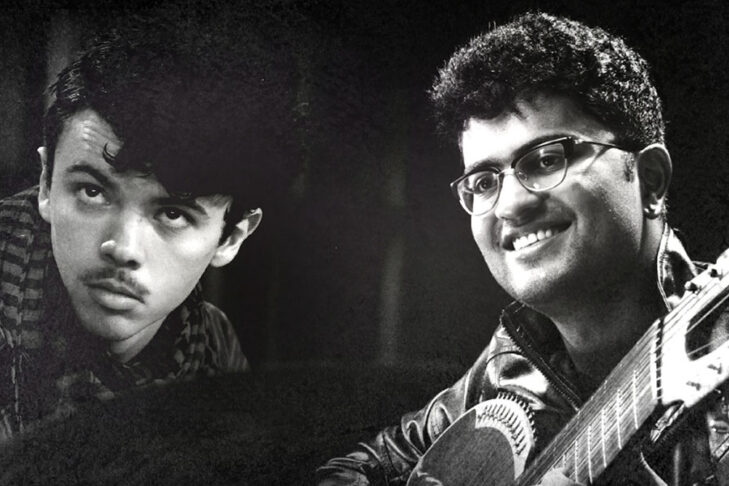 Virtuosic musicians and composers Joey van Leeuwen and Vishnu Ramprasad bring together music that seems worlds apart with a concert that combines Carnatic classical music from South India with Jewish hymns. Just as Judaism believes in the unity of one God, Hindu Vedantic philosophy believes that all of our souls are connected in the oversoul of the atman. The duo will show the connections between these two ancient traditions, not only diving into the music, but philosophy as well, with visual examples that will explore their different cultural backgrounds.

Vishnu Ramprasad is a stringed instrument player from Bangalore, India, and the inventor of the Navtar instrument, which he uses for his own unique style of music that combines Carnatic music with jazz and other world styles. Joey van Leeuwen is a Jewish-American jazz drummer and percussionist from Rochester, New York, who has studied Carnatic and world music for many years.

The concert will begin with a Carnatic performance of krithis, devotional songs dedicated to the Hindu gods Ganesha, Brahma, Vishnu and Shiva, along with an explanation of their meaning and religious significance. Following will be an exposition of Jewish sacred hymns and songs, including the songs of the little-known Dravidian (Southern Indian) Jews of Kerala. The final segment will feature original arrangements of music combining these sources into a language that is neither one nor the other, but a mixture of both. Joey and Vishnu show that even from opposite sides of the world, people can come together to learn, make music and celebrate life.

Doors open at 7; concert begins at 7:30. All seating except front row is unassigned.