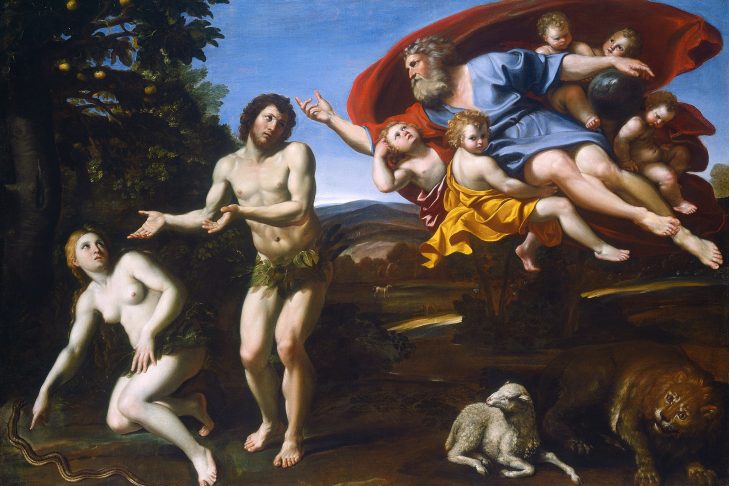 “The Rebuke of Adam and Eve” by Domenico Zampieri

Rosh Hashanah, the Jewish New Year, is a time of rejoicing and introspection. Rabbinic tradition teaches that Rosh Hashanah is the anniversary of the sixth day of creation, on which Adam and Eve were invented by God. (Right before Shabbat! Because God needed a nap after that.)

In the Genesis story, God forms the first human being out of clay, breathes life into it and plops it right down in an off-the-grid botanical utopia called the Garden of Eden. God gives a few simple rules for the human to follow: The human, Adam, can wander around the garden nude (Adam was too much of a noob to know about clothes) and eat any fruit or veggies that grew there, with the exception of the fruit from the Tree of Knowledge of Good and Evil.

After observing that Adam was, frankly, a bit of a non-starter as one single human entity, God knocks Adam out and splits His creation into two beings: Adam and Eve. Everything was A-OK in the Garden until Eve makes a little oopsie-whoopsie and eats the fruit from that highly off-limits tree, then gives some of the fruit to Adam. Once they have their spontaneous snack, they suddenly realize that they are more naked than Kim Kardashian’s Instagram feed, and fashion themselves some underwear out of fig leaves. Apparently, the Garden of Eden wasn’t as off-grid as advertised because immediately God rolls up to find out 1. Why Adam and Eve were no longer into nudism and 2. Why they ate the fruit of that damn tree! Adam attempts to mansplain that it was Eve’s fault, while Eve, panicking, blames a snake for telling her to eat it. God, disappointed in his rather problematic experiment, volun-tells an angel to evict Adam and Eve from their leafy abode, forcing them to get real jobs. What a downer.

Here are five artist representations of the story of Adam and Eve in the Garden of Eden. In many of these paintings, the fruit Adam and Eve eat is shown as an apple. The Torah does not identify the type of fruit, but the sages have suggested everything from figs to etrogs. The apple visual, and the depiction of God as a humanoid with a beard and halo, comes from Christian interpretations of the Genesis story.

Please note that these images have been selected for composition, technical execution and comedic value.

“The Garden of Earthly Delights”
Hieronymus Bosch, circa 1503

“The Garden of Earthly Delights” by Hieronymus Bosch

Let us begin with early Netherlandish master Hieronymus Bosch, notorious for his terrifying, trippy paintings. This painting is actually part of a tryptic, but as one of the three panels illustrates what Bosch thinks hell is like, I’ll spare you all the therapy bills and just show this section. You’re welcome.

This, the left panel, shows Adam waking from a nap to find a quite youthful and fancifully coiffed God about to introduce the newly-formed Eve. Adam looks bemused, Eve looks like God forgot to give her a personality, and everything else in this painting confirms my longstanding hypothesis that Bosch was really into ayahuasca.

At the top of the painting, we see some highly implausible and downright extraterrestrial hill formations. A plethora of random animals populate the landscape, including a boar trying to catch an oddly pointy badger who is careening about on its hind legs, a monkey riding on an elephant (the most normal thing in this whole painting), a creepy giraffe with a dark secret and, next to the sinister giraffe, a basset hound/camel hybrid, which I would absolutely adopt from my local shelter. A lizard with three heads emerges from the water, right by a frog in a white cashmere turtleneck. Directly by Eve’s feet in the foreground, a platypus in a hoodie casually lounges in a sinkhole and reads a book. A cute baby seal cub at the bottom of the image looks like it just gained sentience and has very correctly decided this is his moment to get the hell out of dodge. No word as to what the bizarre semi-phallic fountain represents, but I’m sure we can make an educated guess. 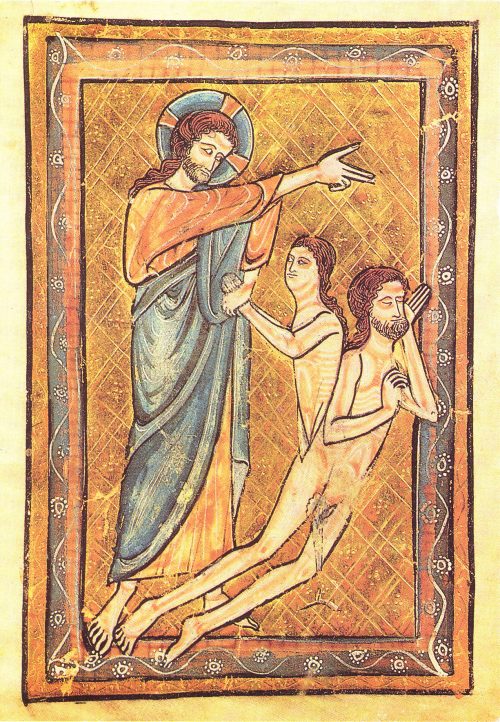 “Adam and Eve” by Unknown

Adam props himself up to take a lil’ nap on the decorative border of this manuscript page, while Eve, who bears an uncanny resemblance to Louise Belcher from “Bob’s Burgers,” emerges out of Adam’s side and immediately goes to pick God’s pocket. God forestalls that effort and points off the page, clearly warning her if she keeps up this kleptomania, he’s gonna have an angel show her the door.

“Eve, the Serpent and Death”
Hans Baldung, circa 1500s 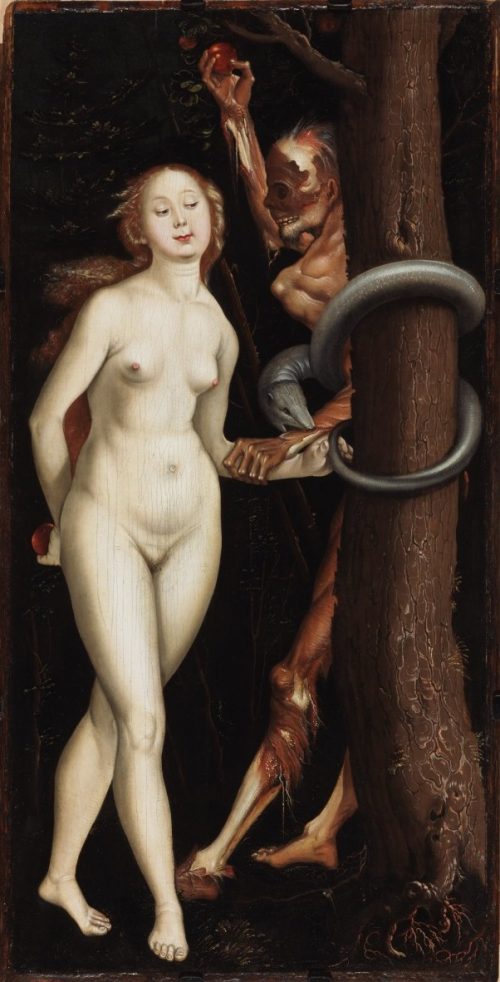 “Eve, the Serpent and Death” is a painting by the German Renaissance artist Hans Baldung. Its four main elements are an obnoxiously smug Eve, a skeletal form representing death/Adam, that pesky tree of knowledge and a grayscale weasel that’s trying to convince everyone it’s a snake.

This painting looks like what would happen if Tim Burton decided to rip off yet another Jewish story for his oeuvre (just like he did with “The Corpse Bride”). Adam seems like he’s wearing some ugly capri pants, but don’t worry! It’s just his skin falling off. His right arm extends upward to grab the apple. Thank goodness he still has his teeth, or he’d have to puree it into applesauce. (On the fifth day of creation, God invented the Vitamix.) Eve’s left hand holds part of the serpent’s tail, while her right hand holds an apple behind her back. Adam Skellington’s decrepit state suggests maybe that “snake” was poisonous, or that his body hadn’t really recovered from God taking half his bio mass away to make Eve.

“The Rebuke of Adam and Eve”
Domenico Zampieri (aka Domenichino), 1626 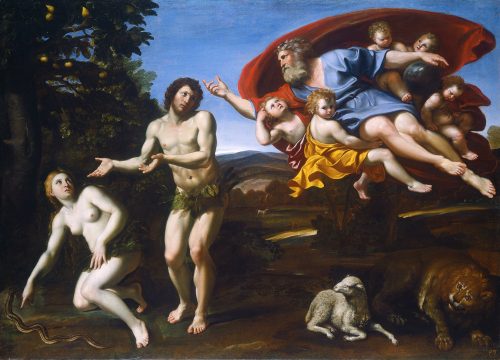 “The Rebuke of Adam and Eve” by Domenico Zampieri

Italian classic-idealist painter Domenico Zampieri was the son of a shoemaker and possibly died of poison, which isn’t relevant to this painting but are still fun facts to know. “The Rebuke of Adam and Eve” illustrates Domenichino’s classical style at the peak of his career. In this narrative sequence, God zips in from heaven, where he was busy posing for Michelangelo’s superlative painting “The Creation of Adam.”

God then exhibits the world’s first instance of a parent being “not angry, just disappointed.” Adam can be seen shrugging helplessly and gesturing to Eve as if to say, “Well, what did you expect me to do? She has nice hair and I have no willpower!” Eve, whose expression conveys a certain withering malevolence toward Adam for being such a narc, desperately tries to cover her own behind both metaphorically and literally by blaming the serpent and modeling her new fig-leaf miniskirt. The serpent, mortified to find himself in the middle of this fiasco, would like to be excluded from this narrative and attempts to slither directly out of the painting. At the bottom right of the painting, it suddenly dawns on the lion that Adam and Eve just ruined this vegan utopia, and at some point, he’ll have to eat his friend, the lamb.

“The Fall of Man and The Lamentation”
Hugo van der Goes, 1479 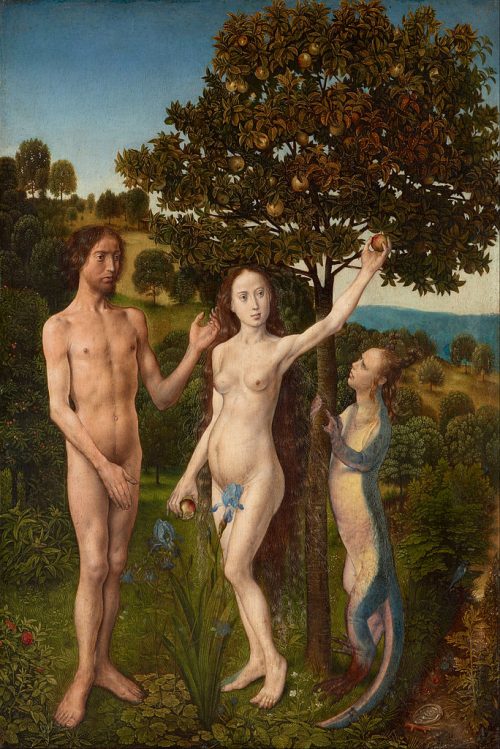 If you thought the Bosch painting was the most disturbing painting in this list and we were clean out of nightmare fuel, I do apologize. Flemish painter Hugo van der Goes depicts the serpent as a bipedal salamander with blue fur, duck feet, an otter-like tail, a human head with braided pigtails and the cloying demeanor of a multi-level marketer trying to sell you on her range of apple-scented essential oils. Eve is totally buying what the snake is selling, and has joined the snake’s downline (#BossBabe, #Hunbot #WorkFromHome). Adam, in the back of his mind, knows the snake is running a pyramid scheme but is going along with it, hoping God doesn’t notice. Spoiler alert: He noticed.