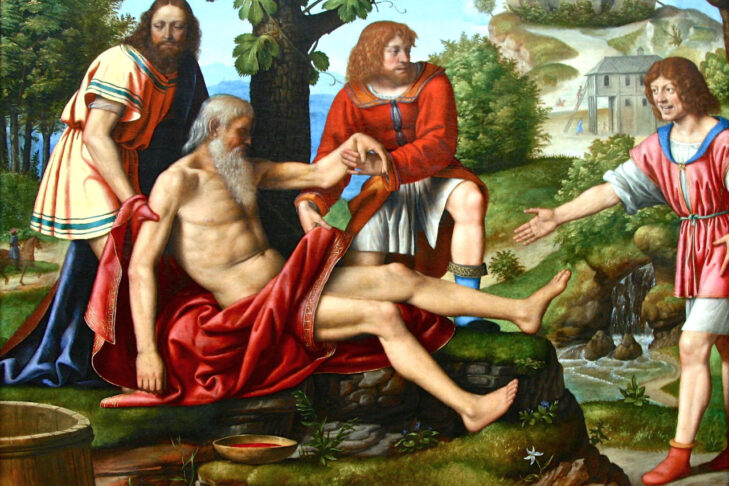 Every week, Jews around the world read a section of the Torah. This portion is called the Parshat (or Parsha), and the full cycle of the complete Torah readings takes place over one Jewish year. Parshat Noach, from Genesis, will be read this year on Nov. 2. The story of Noah and the flood has been an incredibly popular subject for artists throughout history. As antediluvian society descends into a state of anarchy and corruption and nobody is giving Him the respect He wants, God gets real pissed off and decides to pull a Thanos and hit restart on this whole “Earth” thing. Noah, the “final girl” of this particular horror story, is spared, along with his family, and pairs of each animal (one pair of non-kosher animals, seven pairs of kosher species) go in a floating ark that God instructed him to build. The rest of the world drowns. God feels a bit bad, but not really. He says He’ll never do it again, because global genocide is, indeed, exhausting.

Here are four artist representations of the story of Noah and the ark. Please note that these images have been selected for composition, technical execution and comedic value. 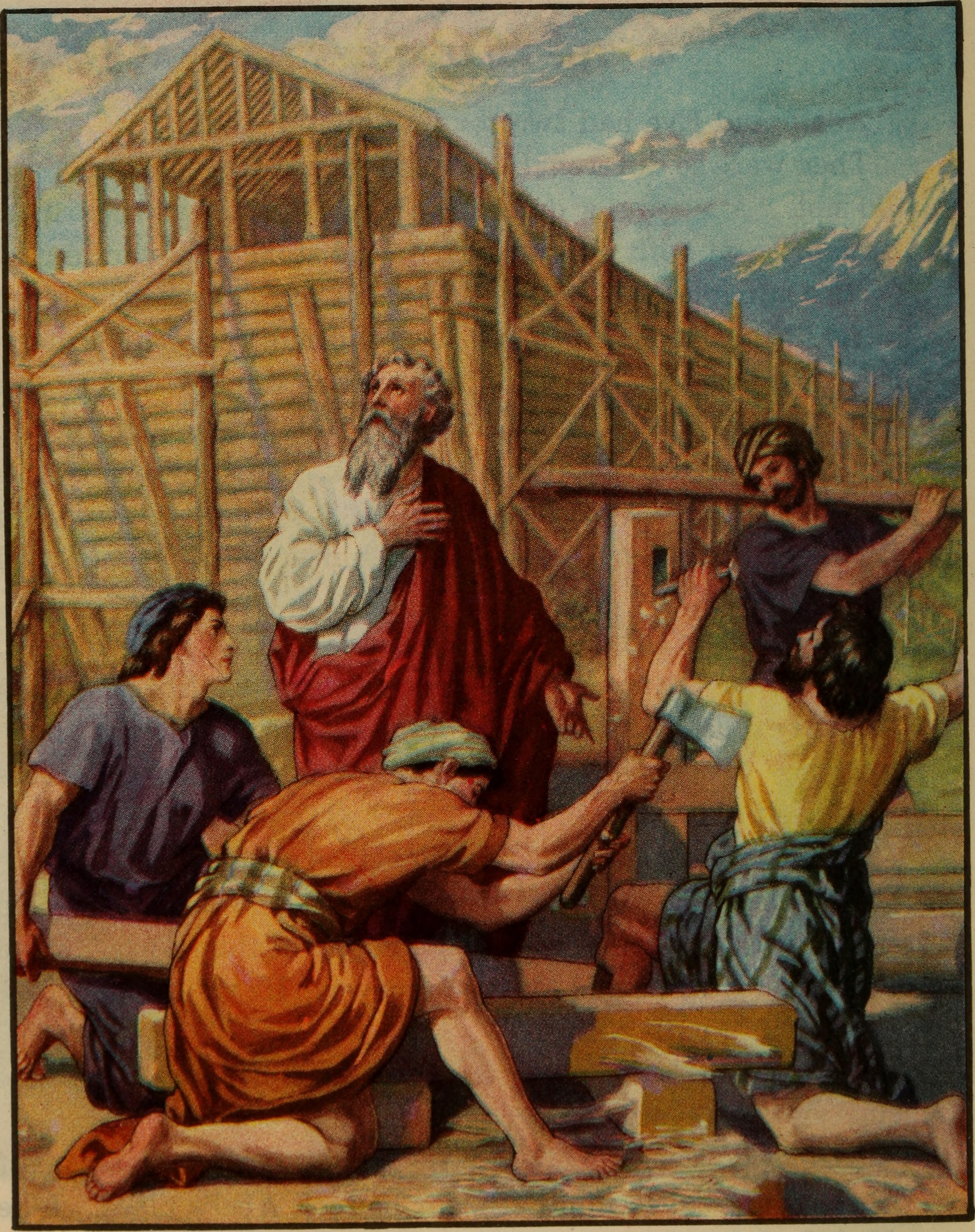 This image from a 1919 Bible primer for Sunday school use is also a very helpful illustration for how times have changed for construction workers over the past several thousand years. What happens when God tells you to build an ark, but you are also an incredibly absent-minded construction site supervisor? Workplace. Injuries. That’s what. Yellow Hanes T-Shirt-Wearing Man to the right of the illustration gets a hatchet in the shoulder, bringing a whole new meaning to “shoulder blade.”

Did Yellow Shirt Man know he was entitled to a safe work environment, free of health and safety hazards according to OSHA? This picture seems to point to “no.” Was he provided with safety gear? There’s nary a hard hat or pair of Timberland boots in sight. Did he have cause to fear employer retaliation? Um, yeah, this particular employer was just days away from drowning the entire world via flood. One hopes he survived both the unfortunate hatcheting and the flood…but I wouldn’t hold my breath. 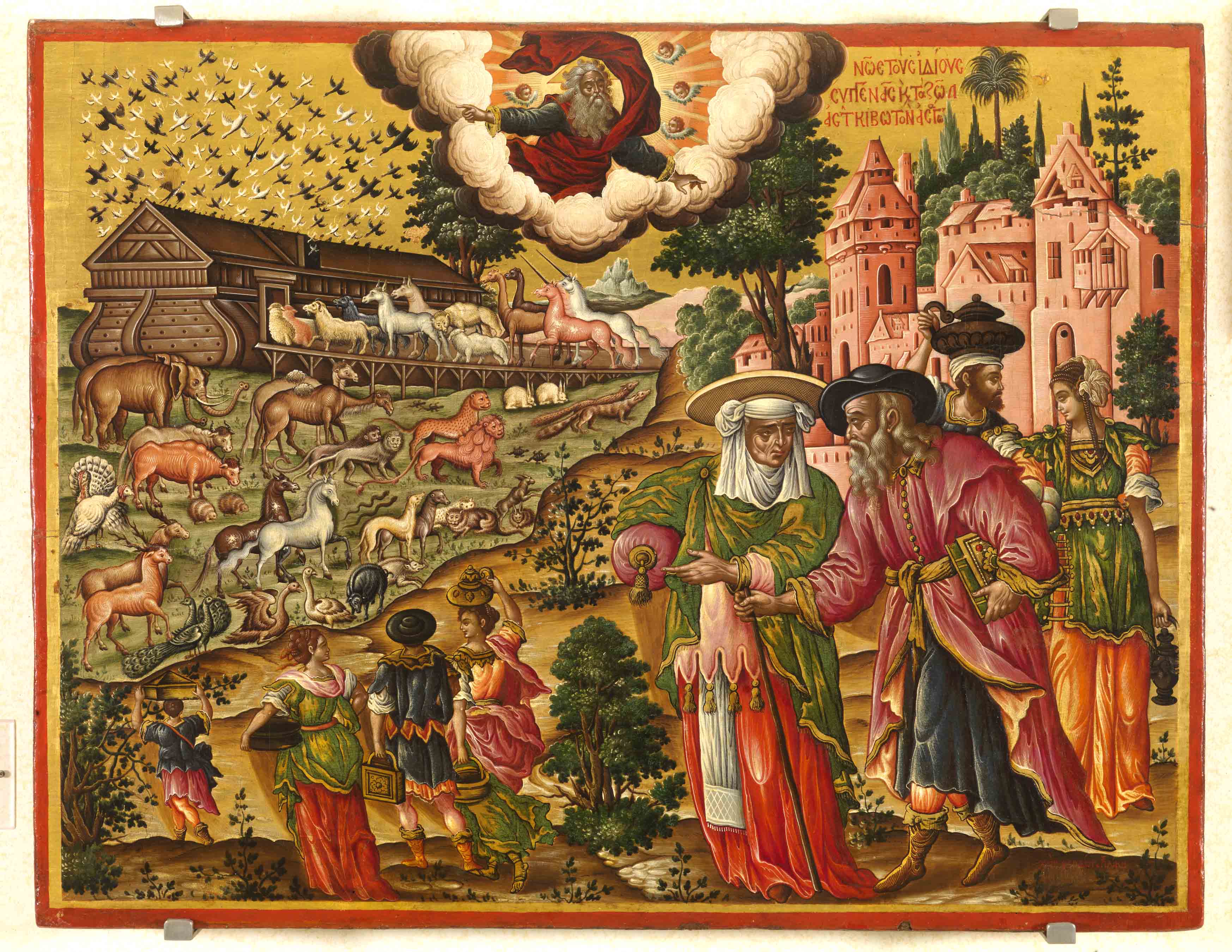 “Noah’s Ark” by T.Poulakis after engraving of J.Sadeler (17th c.)

Greek Renaissance painter Theodore Poulakis was born in Crete and migrated to Venice, where he did most of his work and, I assume, most of his hard drugs.

Do not adjust your screen. Seriously, it won’t help. I took a Klonopin while looking at this and it only reduced the claustrophobia by .5%. It’s best to confront this painting bravely, by looking at it right in its maniacal eyes and hoping it gets intimidated.

At the center top of the painting, God and His posse of severed baby heads with wings look down upon the animals filing into the ark. We’ve got some animals that look reasonably recognizable—some sheep, horses, porcupines, turkeys, elephants…and then we go completely off book, friends. I’m not even talking about the unicorns! Those are essentially normal, as far as fake animals go.

What shocked me the most is how many of the animals have the body type consistent with that of my dog, who is a chihuahua/pit-bull mix, just with small modifications to denote they are, in fact, totally different species. Camels, after all, are just skinny chihuahuas with cotton balls taped to their backs, and giraffes are disgruntled chihuahuas with super long necks. The two actual dogs who make it into this painting are clearly chihuahua-greyhound hybrids. All the other non-American Kennel Club conforming animals have primate faces. See the “lions,” “leopard,” cat (allegedly) and the bear(?) on the gangplank yelling at his long-suffering significant other. Always remember your math, folks: One elephant equals approximately 13.5 terrifying rabbits.

But far and away the most nightmarish animals in this painting are definitely the people. Noah’s wife, played here by Ian McShane, attempts to carry a bolster pillow on board (talk about privileged—she wants to be comfy while the rest of humanity drowns), while one of Noah’s sons schleps a huge bike lock onto the ark. Here’s a family who really knows how to pack for emergencies. 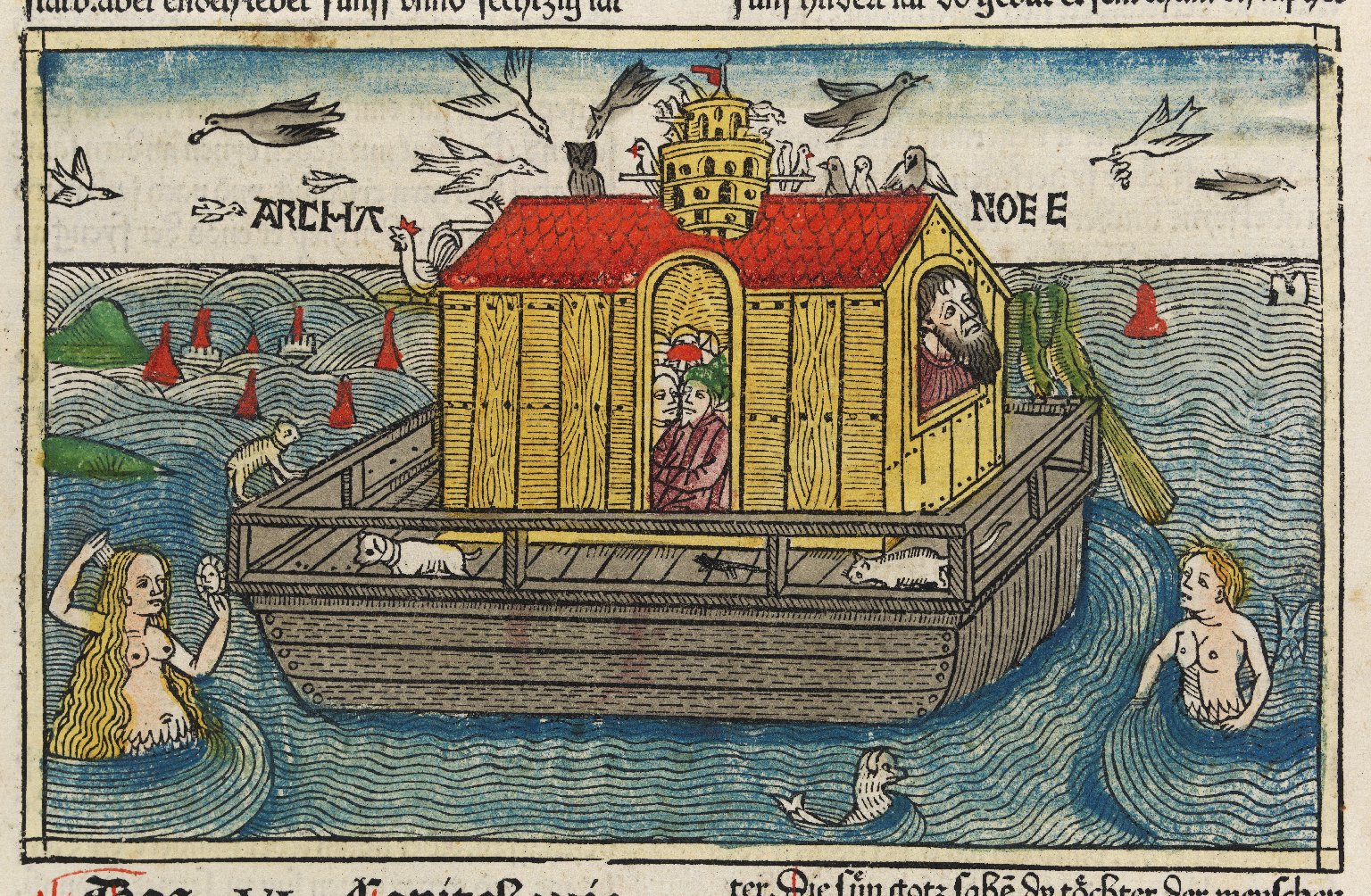 Anton Koberger established the first printing house in Nuremberg in 1470. He had 25 children. I imagine the depiction of all the humans squished into the ark in this engraving was an accurate representation of Anton’s house at dinnertime. I find this illustration charmingly ridiculous for several reasons, including Noah’s beleaguered expression, the collection of dogs, cats, lizards and peacocks chilling on the ark’s deck, the tiny, anachronistic crenellated castle towers peeping out of the waves, the mermaids getting ready to parrrrrttttaaaay, and the thing that looks like a King Charles Spaniel but is probably supposed to be a dolphin swimming around the foreground. Look, Noah tried, Anton tried, everyone is just doing their best, OK? 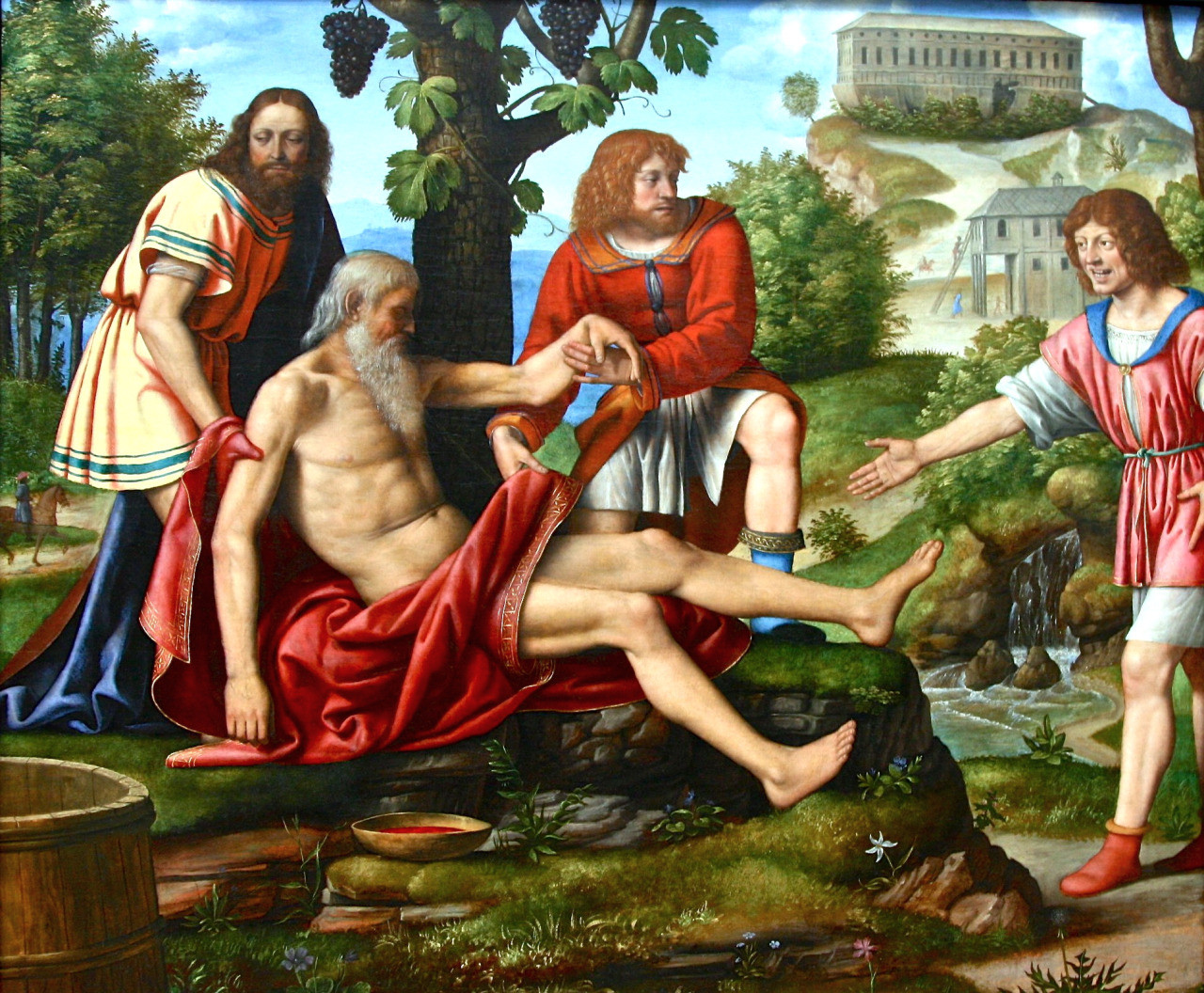 After the flood was done, Noah did what any self-respecting person would do after having to care for every single surviving human and animal in a contained space for an extended period of time and got completely blitzed. I can totally relate—I feel this way after watching my dog and her best friend fight over a sock for 20 minutes.

Unlike Noah, however, I have no actual human children. Noah had three, and one was a real jackass with a weird thing about red footwear. Finding Noah completely blackout drunk, his son Ham pointed, laughed like Nelson from “The Simpsons,” drew something highly inappropriate on Noah’s forehead in Sharpie and posted it to TikTok. Noah’s other children, Shem and Japhet, are mortified by everything going on. As am I, friends. As am I.