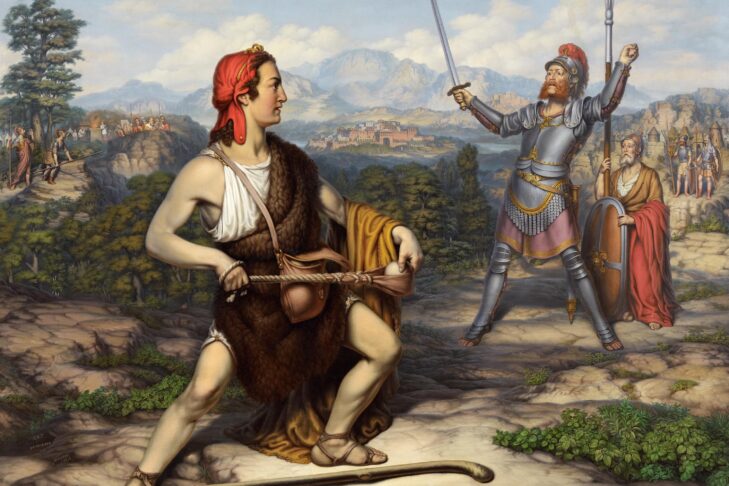 The one-on-one battle between baby-faced shepherd boy David and giant super soldier (and possible steroid user) Goliath is one of the most epic scenes in the Tanach. Allegorical depictions of this story have been used throughout history to conveniently frame political and personal narratives. Just ask Michelangelo and the Medici family, or any exhausted modern sports columnist struggling to come up with a headline on a deadline.

In the Book of Shemuel (Samuel), King Saul and the men of Israel are facing off against the Philistine army. Goliath, mega-tall warrior of the Philistine forces, comes out to flex in his full bronze armor and dares Saul to send someone against him in single combat. He keeps negging the army of Israel for a full 40 days, because they simply don’t have an equivalent badass on hand. It was so embarrassing for Saul that I’m vicariously mortified just writing about it. A young shepherd named David happened to be there one day delivering snacks to his older brothers, who were among the soldiers in the army of Israel. Hearing Goliath dissing everyone left, right and center, David asks around and learns that whoever kills Goliath will receive huge rewards, including marrying Saul’s daughter.

Saul hears David asking and thinks that David can’t possibly kill Goliath because he’s “just a shepherd boy,” which is the biblical equivalent of “she’s just a bartender.” David side-eyes this, as he’s previously killed lions to rescue his flock. God saved him from the lions, and by David’s logic, he doesn’t see why this sitch should be any different. He just strolls out to the battlefield with his stick and a bag full of rocks.

Goliath, suitably insulted to be faced by some kid, tells David he’ll feed his body to the birds and beasts. David doesn’t bat an eyelash, replying that, no, actually, he’s gonna kill Goliath, and he will achieve this victory all through his faith in God. Goliath advances on him, but before Goliath can say, “Oh, wait, I may have misjudged this!” David sinks a rock into Goliath’s forehead in what I can only imagine was a very satisfying thunk. Satisfying for David. Not for Goliath. Obviously. David beheads the prone Goliath with Goliath’s own massive sword. The Philistines decide this would be an opportune time to leave, but they are caught and killed by the freshly-inspired pursuing army of Israel. David takes Goliath’s head as a found-art object for his coffee table. The dramatic showdown makes David massively popular and ignites the flame of pure jealous bitchery in Saul’s heart, eventually leading to Saul’s downfall and David’s (problematic) reign.

Here are five artist representations of the story of David and Goliath. Please note that these images have been selected for composition, technical execution and comedic value, because this is what happens when you can’t afford Michelangelo. 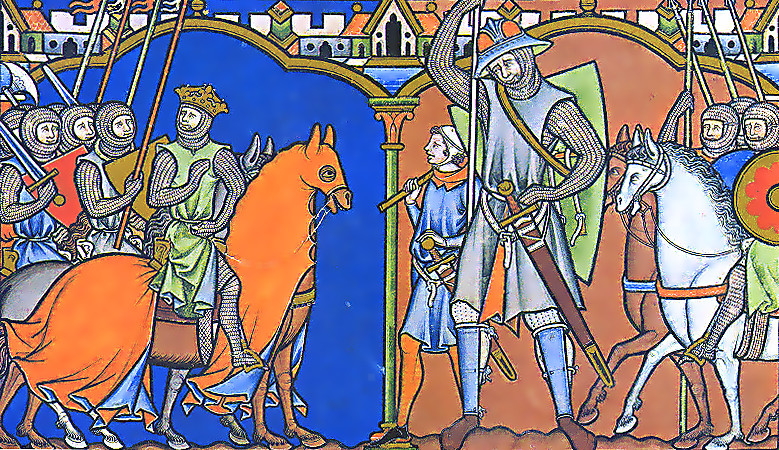 Here we have a still from “Monty Python and the Holy Grail.” I mean, here we have an illuminated page from the Morgan Bible (also known as the Maciejowski Bible or Shah Abbas Bible) showing the moment when Saul’s army and Goliath’s army square up. This Bible, believed to have been created for French King Louis IX, consists of miniature paintings of biblical events, just with all the set design and sartorial choices of 13th-century France. Later, this Bible was given to Shah Abbas I of Persia, who may have ripped out the illustrations he didn’t like. I’m just perplexed he left this one in.

King Saul, on the left, looks very concerned for his prospects, while his orange-garbed horse would like to have words with the anonymous artist of this piece about the dangers of irrational devotion to contrasting colors. Goliath, on the right, just clunked his head on the top of the frame and looks like he’d like to sit down for a moment, while Goliath’s horse is furious he got his hair permed for this. Art appreciation pro tip: It’s generally quite easy to tell if an artist is trying to avoid drawing hands. (I know this, because I, ahem, am just such an artist myself.) The clue, in this instance, is that only one figure has visible fingers. Everyone else has chainmail mittens, or hooves. And THAT, my friends, is what I call very creative problem-solving. 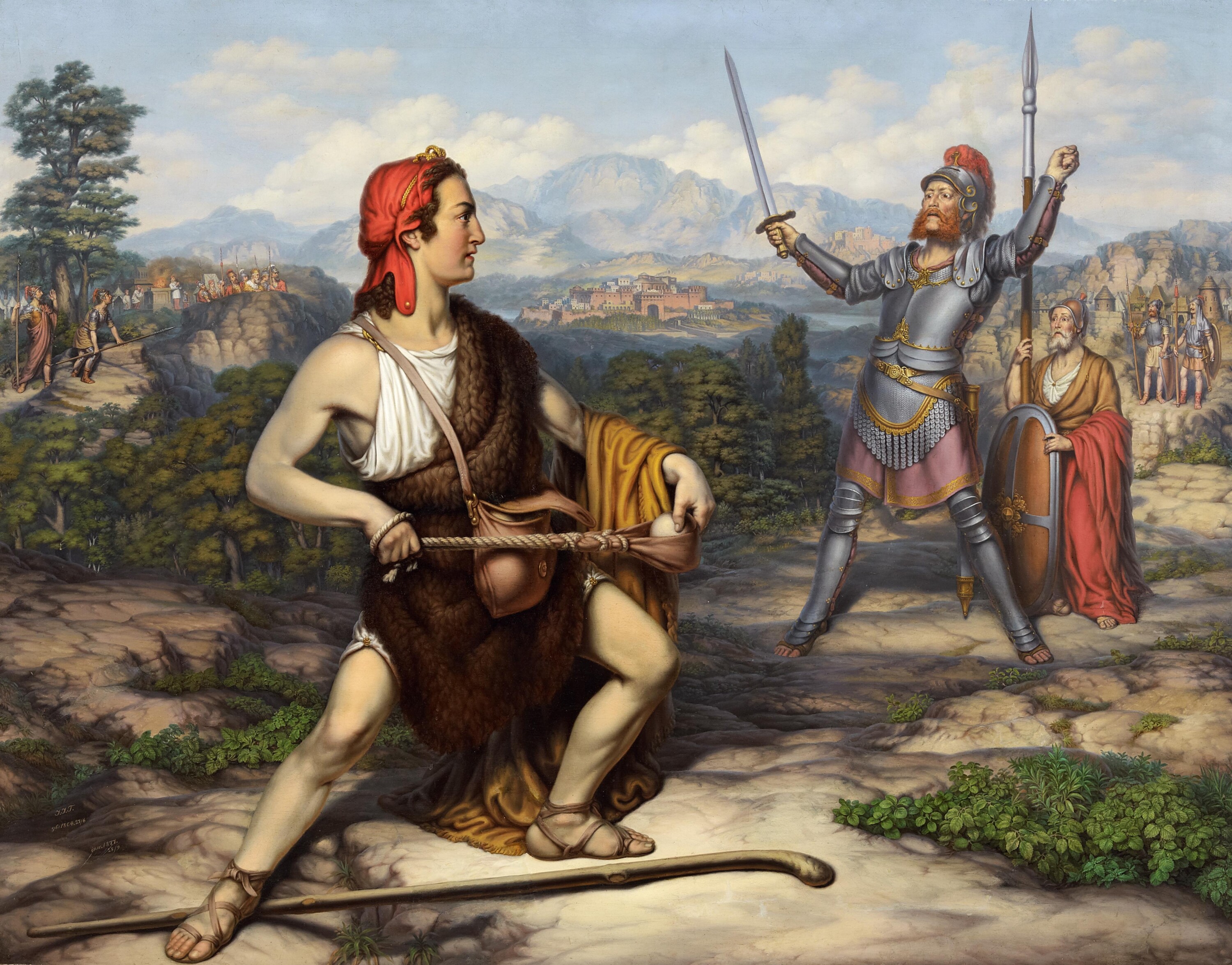 Ah, linear perspective! Even more challenging than drawing hands! Creating an illusion of three-dimensional space on a two-dimensional surface is quite tricky, yet there are RULES to this artistic technique, rules that apply to all subjects, whether it’s a landscape, still life or illustration of a giant with a sword fighting a child with a rock. This painting obeys none of these rules.

In the foreground, in an almost inconceivably awkward pose, is an ENORMOUS David with a bocce ball in a sling. Now, remember, David is not the giant in this story, but this painting would have you believe otherwise. In the mid-ground is Goliath, who is simply not far enough away from David to make the fact that he’s half of David’s height believable. Goliath appears to shake his fists in frustration at his diminishment. The guy holding Goliath’s shield is one-quarter of one David. I don’t do math, but even I can tell you that this simply does not add up. To add insult to injury, Goliath not only has to contend with an absolute UNIT of a David, but he also has to die wearing the unfortunate mutton chop beard of Martin Van Buren. Osmar Schindler was a German painter of the Dresden Academy. His works are a mixture of impressionism and art nouveau, but in this lithograph he utilizes a style one could more accurately describe as “HBO Max Presents: David vs. Goliath: The Snyder Cut.” Goliath is a prototype of “300”-era Gerard Butler, with the addition of an outrageously high ponytail beyond Ariana Grande’s wildest dreams. The Philistines are depicted with truly cringe-inducing racism, and the juxtaposition of David, as a skinny white corpse with an orange mullet and the phalanges and loincloth aesthetic of Gollum, doesn’t help. Meanwhile, Goliath’s shield-bearer is doing low-budget Khal Drogo cosplay. I knew Khal Drogo. Senator, you are no Khal Drogo.

“David With the Head of Goliath and Two Soldiers” (Valentin de Boulogne, circa 1620) 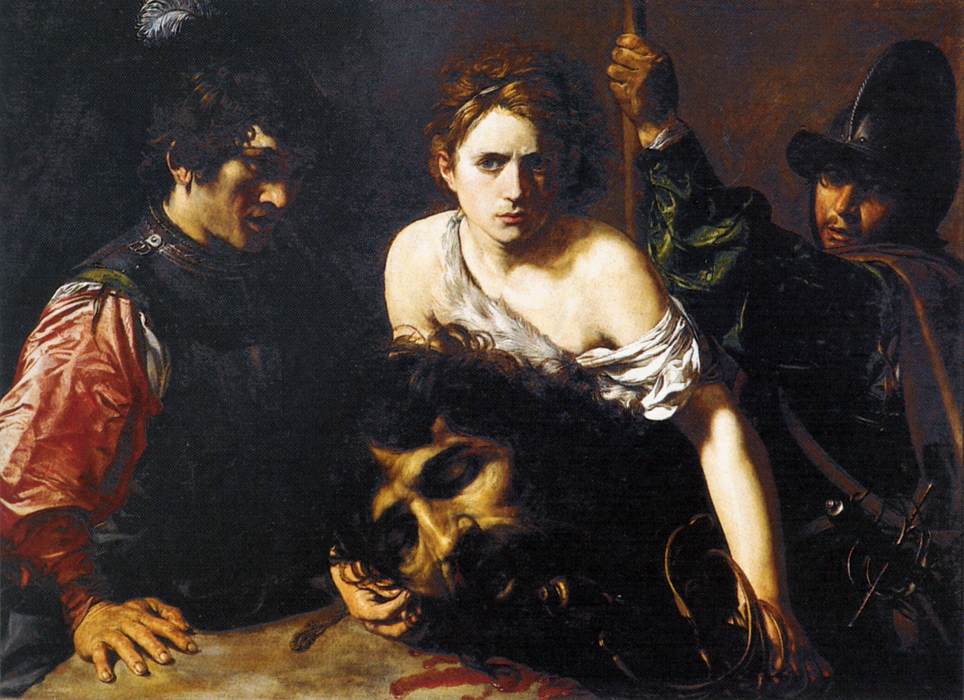 “David With the Head of Goliath and Two Soldiers” by Valentin de Boulogne, circa 1620 (Public domain via Wikimedia Commons)

French painter Valentin de Boulogne came from a family of artists and was lucky enough to learn from the brilliant Caravaggio—just check out the chiaroscuro (contrasts between light and dark) in this painting! Sadly, like Caravaggio, de Boulogne also had a really sketchy demise—he died after dunking himself in freezing water while drunk. (Allegedly.)

Now, you may be wondering why on earth this painting, which I actually love, is on this list. It’s because David, played here by time-traveling scamp Timothée Chalamet, looks like he’s schlepped Goliath’s head all the way to baggage check and hoisted it onto the scale, only to learn it’s too big to fit in his carry-on. In this moment, he’s trying to decide what on earth he can take out of Goliath’s skull to bring it down to under 25 pounds. We’ve all been there, friend.

“Self-Portrait as David With the Head of Goliath” (Johan Zoffany, 1756) 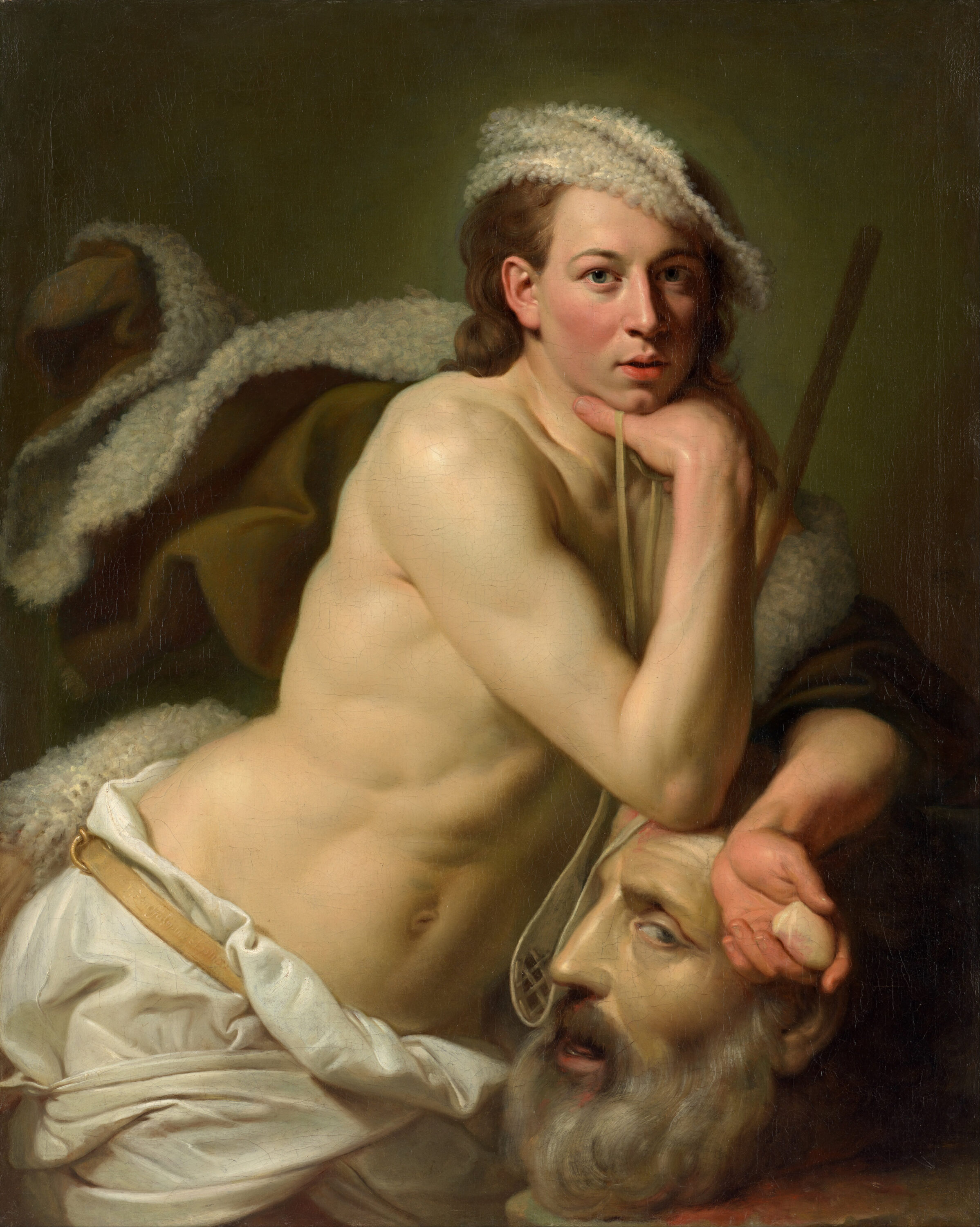 “Self-Portrait as David With the Head of Goliath” by Johan Zoffany, 1756 (Public domain via Wikimedia Commons)

HA! You were lulled into a false sense of security by the comparative innocence of our previous entry. Now we shall end on a truly disturbing note. Twenty-three-year-old German neoclassical painter Johan Zoffany decided it was a good idea to paint himself as David, lounging around with Goliath’s severed head almost in his lap. Zoffany is presenting himself as an icon of gifted youth, emphasizing physical beauty and some very uncomfortably intense eye contact.

We often decry “the male gaze” in feminist theory, but I argue this painting is more from the perspective of “the cannibal gaze”: Zoffany was once shipwrecked and, according to historians, not just my lurid imagination, he ate a sailor. Now that you know that little fact, look back at his self-portrait as David. Look deep into his smize. This is definitely the expression of a man who ate people, and liked it. Goliath’s head is as shocked as any of us, imploring us to please, please take him away from this narcissistic creep. I wish I could, you poor thing. Even the terrifying champion of the Philistines didn’t deserve this.