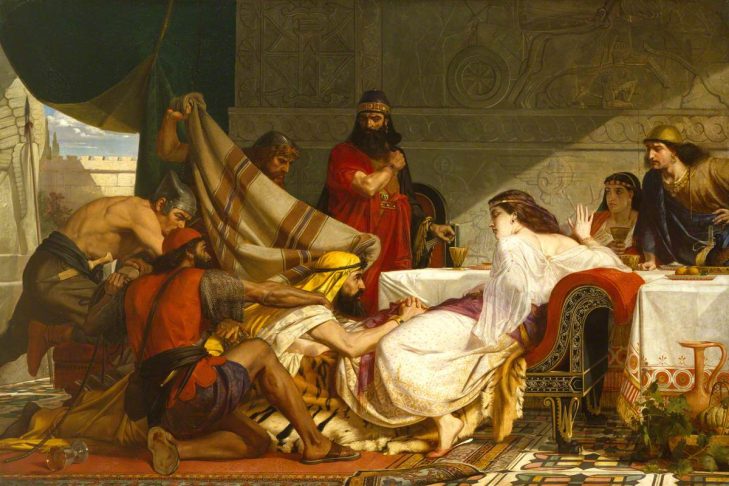 The heroine of the Purim story, Queen Esther, has served as the muse to many artists throughout history. She is the symbol of an ideal woman—both physically and morally—making her a perfect character upon which artists can project whichever paradigm of female virtue and beauty suits their particular agenda and art movement—Renaissance, Pre-Raphaelite and even surrealist expressionism (thanks, Dalí!).

Here are seven of my favorite artist representations of Esther and her story. Please note that these images have been selected for composition, technical execution and comedic value. 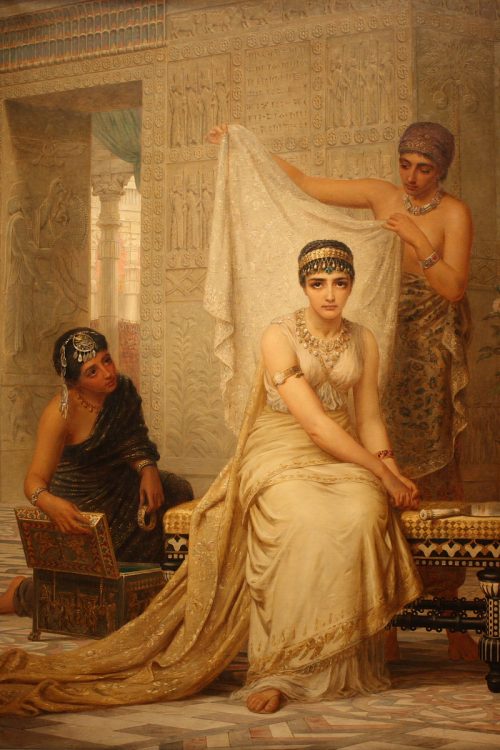 Edwin Long was a Victorian English genre painter of allegorical, portrait and history subjects. Here, we see how well he captured the essence of Esther’s eloquent Resting Bitch Face. Her expression clearly reflects her inner turmoil surrounding both her precarious position in King Ahasuerus’ harem, and also her thoughts about how problematic it is that she now has one servant whose entire job is holding a scarf, and another who only does bracelet wrangling. 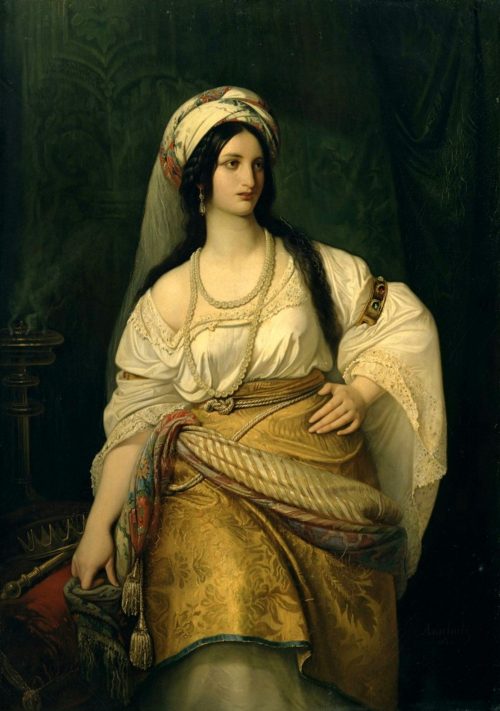 German Hermann Anschutz of the Düsseldorf school of painting perplexingly illustrates Esther as a woman who has decided to wear every single article of clothing she owns rather than check another bag on her flight to Persia. 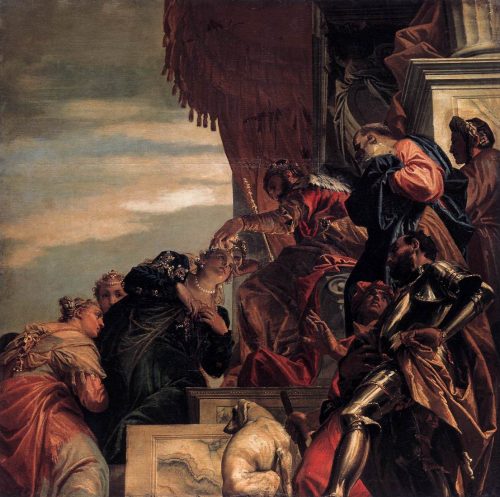 Italian Renaissance painter Veronese had an elaborate style of mythological and allegorical painting that can only be described as “extra AF.” You might be wondering at this weird vantage point—but there’s a reason for that! It was painted on a ceiling, with the intent of creating the illusion of space beyond the room. This isn’t anyone’s best angle, akin to accidentally opening the front-facing camera during a selfie gone awry, but I do give credit where credit is due: The prominent figure of a cute dog manages to steal the focus from both Esther’s coronation and from Haman’s rather fierce Angelina Jolie Leg Pose in the lower right corner of the painting. 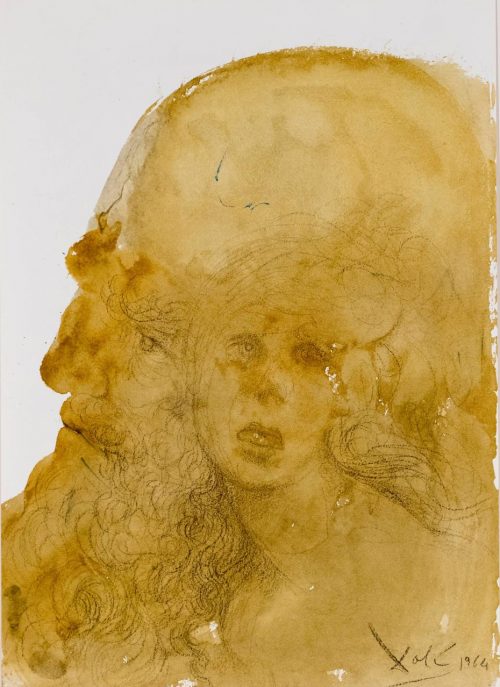 Ah, Dalí. Always bringin’ his best eccentric game. In this lithograph from a gouache original, we see Ahasuerus (or Assuerus, in Dalí’s spelling) with his mind both literally and figuratively filled with an obsessive vision of Esther. She’s a hostage in his skull as well as his harem! #metaphors #feminism #timesup. I would not want this claustrophobic painting hanging on my wall, but I do appreciate this visual commentary on Ahasuerus’ fragile masculinity.

“The Feast of Esther”
Johannes Spilberg, circa 1644 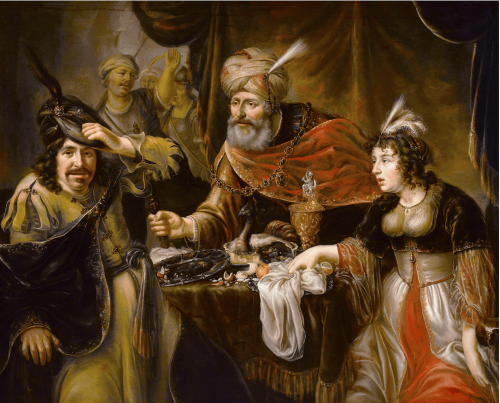 This oil on canvas painting by German Baroque painter Johannes Spilberg depicting Esther’s fateful dinner party is noteworthy in my eyes for two unique elements: 1. Some nebulous anatomy problems with Esther, wherein her breasts appear to be attached directly to her clavicle, and 2. Haman comically breaking the fourth wall in the style of “The Office.” We shan’t speak of the judgmental pheasant on the table. 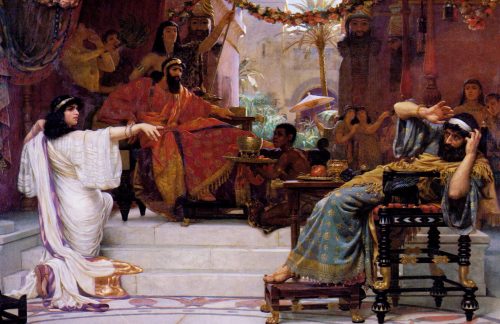 There’s a lot going on here, which makes sense as Pre-Raphaelite painter Ernest Normand was known for his excessive style. Esther denounces Haman in front of King Ahasuerus while Haman, slumped in his chair, has thrown his hands up to defend himself against Esther’s vicious accusatory pointing and ward off an incipient stress migraine. As in many paintings of this story, the most interesting figures to me are the background servants/slaves—in this case, the two figures excitedly gossiping at the upper left corner of the painting (while still fanning the king! #multitasking) clearly are enjoying the heck out of this juicy disruption of their daily servitude.

“The Festival of Esther”
Edward Armitage, 1865 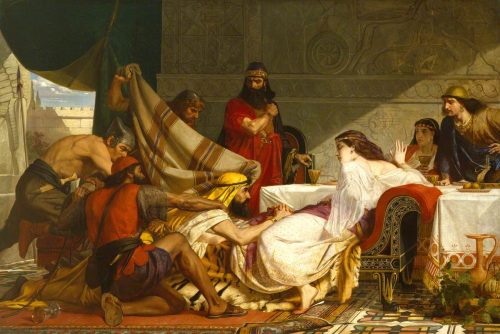 Look at the DRAMA in this painting of Haman begging for Esther’s mercy! Although Victorian-era Edward Armitage obnoxiously portrayed Esther as “whiter” than everyone around her, which was a choice intended to symbolize her purity and innocence but is entirely historically inaccurate, there is still quite a bit to enjoy about this painting. In particular, the way Esther isn’t taking any more crap from Haman and is telling him and everyone else in the room to “talk to the hand.” The emotional turmoil taking place is suggested by the overturned cup, and the carpet’s flipped corner. As with Edwin Long’s painting of Esther, here again we see a servant who is posing with some fabric to help make the backdrop more interesting and to create a diagonal to draw the viewer’s eye to the center figures of Esther and Haman. Apparently, Drapery Production Assistant was a key figure in fourth-century BCE Persian court life.