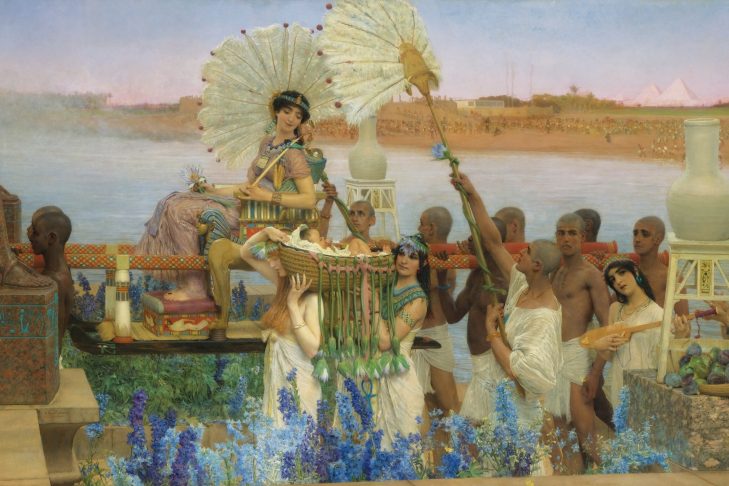 “The Finding of Moses” by Lawrence Alma-Tadema

The Exodus is the most dramatic storyline in the Torah. There are so many big, cinematic visuals—the backdrop of the pyramids, secret aquatic baby adoptions, deadly plagues and several highly implausible yet very evocative geological transformations involving large bodies of water. This story has given artists throughout history plenty of material to work with—results run the gamut from absolutely stunning to unintentionally hilarious.

Here are seven of my favorite artist representations of Moses and the story of the Israelites in Egypt. Please note that these images have been selected for composition, technical execution and comedic value.

English painter Edward John Poynter specialized in elaborate tableaux, and “Israel in Egypt” is no exception. The painting shows dozens of Israelite slaves painfully schlepping a red granite lion sculpture while getting whipped by Egyptian overseers. To the left of the painting, a royal entourage can be seen, with a tiny baby Moses, shaded from the glaring sun by a collection of snazzy parasols, standing on the lap of Pharaoh’s daughter. Toddler Moses holds a whip himself, which definitely seems like the last thing you would want to give someone in their terrible twos. At the center of the painting, an injured slave is given aid by an Egyptian. Stay hydrated, everyone! 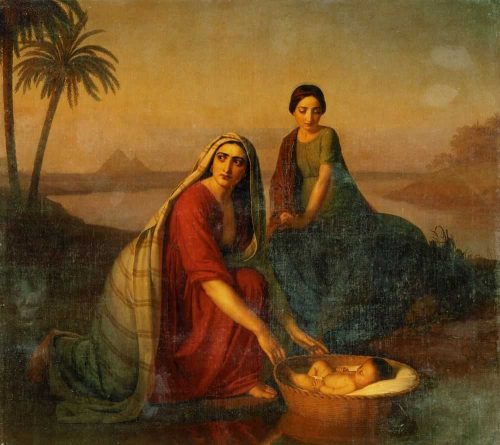 Full disclosure: I love this painting. Alexei Tyranov, a Russian portrait and genre painter, shows Yocheved and Miriam hiding Moses in the Nile river. Yocheved is looking over her shoulder, thinking, “There better not be anyone watching. I refuse to be mom-shamed over this!” while Miriam regards baby Moses with the sort of bored all-knowing ennui that only a teenage prophetess can muster.

“The Finding of Moses”
Lawrence Alma-Tadema, 1904 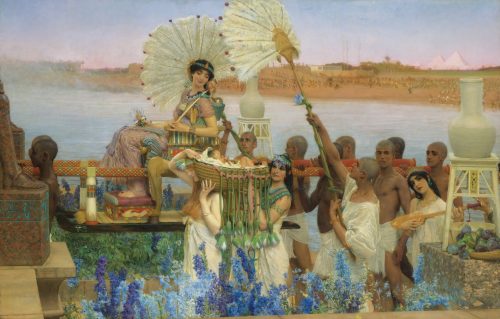 “The Finding of Moses” by Lawrence Alma-Tadema

Anglo-Dutch painter Sir Lawrence Alma-Tadema traveled to Egypt before painting this fanciful Coachella procession of Pharaoh’s daughter taking baby Moses home from the Nile. The ornamental elements in this painting, including the motif of the bound captives decorating Pharaoh’s daughter’s footstool and the patterns on her chair, are based on the real research Alma-Tadema conducted. That doesn’t save this lavish and beautiful image from also being very ridiculous. These poor slaves. Not only do they have to carry this obnoxious privileged woman and some random baby she found on their backs, but she also makes the female slaves wear huge drooping flowers over their faces so they can’t see where they’re going. Insult to injury. 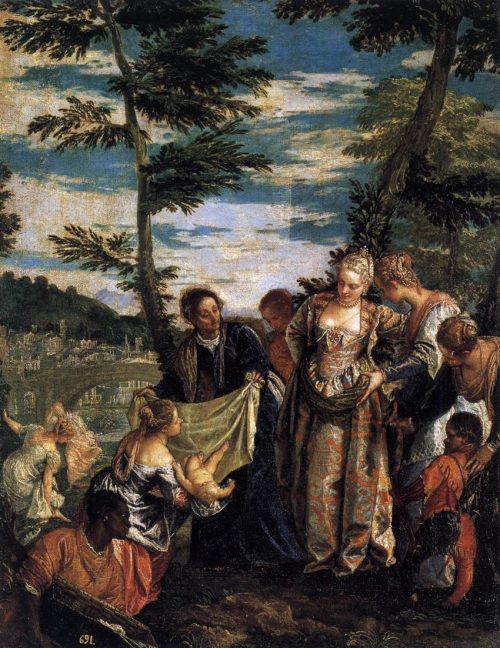 Renaissance painter Veronese had a very, er, different take on the finding of Moses. If the Exodus story took place in Versailles, this is exactly what we’d get: A powdered blonde Pharaoh’s daughter who resembles Madame de Pompadour, and an Italian town in the background standing in for Egypt. Lastly, some ladies-in-waiting are in the midst of dropping baby Moses head-first onto the ground. Way to go, ladies. Way to go. 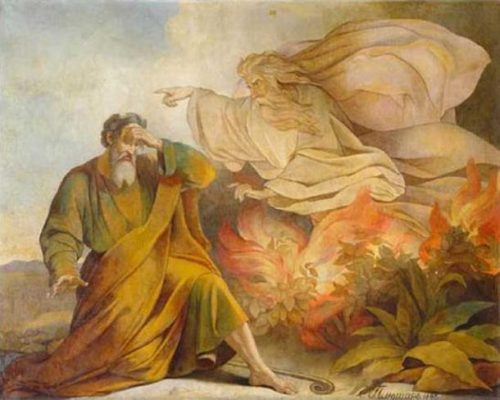 “God Appears to Moses in Burning Bush” by Eugene Pluchart

Franco-German Eugène Pluchart’s painting, which hangs in Saint Isaac’s Cathedral in St. Petersburg, shows the moment where God emerges irately from his clump of flammable plastic ferns and admonishes an overwhelmed Moses to get back to Egypt already and rescue the Jews! Moses can’t figure out if this is real or if this is an acid flashback. 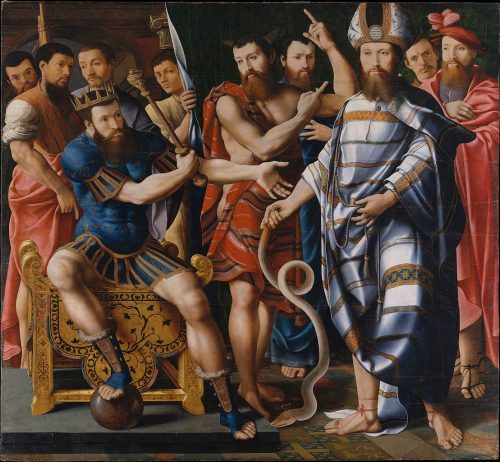 In this allegorical portrait, members of the Dinteville family are painted into a scene in which Aaron magically turns his staff into a snake to prove to Pharaoh that he and Moses have got real-deal power on their side. François II de Dinteville shows up in this painting as Aaron, with Jean de Dinteville as Moses, and French King Francis I lends his face to Pharaoh. The identity of the “Master of the Dinteville Allegory” is unknown, just as it’s unknown why exactly Pharaoh’s foot rests on an exercise ball, or why Moses is wearing a modified pope hat and an embroidered snuggie. What is clear is that the late, great Steve Irwin would never have condoned holding a snake by the tail in this manner.

“The Crossing of the Red Sea”
Nicolas Poussin, 1634 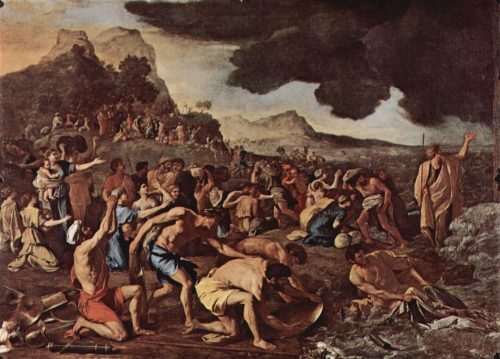 “The Crossing of the Red Sea” by Nicolas Poussin

French-born artist Nicolas Poussin founded the French Classical tradition. His theatrical painting depicts the moment the Red Sea closes over the Egyptians, in a complex composition with layered figure groups and a sense of real depth and space. Here we see the fleeing Israelites trying to get some chores done mid-miracle: The man in the lower right corner of the painting has decided now is exactly the time to wash some clothes previously owned by an Egyptian (the Egyptian is still wearing them), while two men next to him are trying to toivel a new platter that used to be some guy’s shield. At the extreme right of the painting, Moses looks behind them as if asking, “Dude, you all saw that, right? The sea just, like, split!” Toward the left of the painting, a man in a white turban and red wrap dress offers a chinchilla to God.