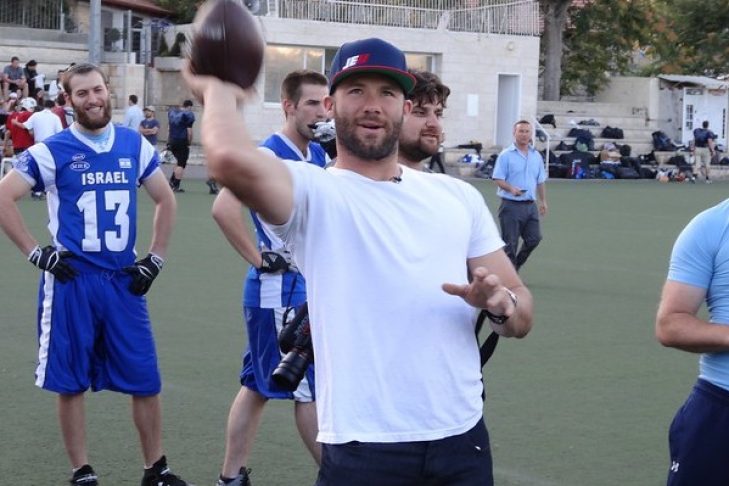 Just ask the defensive backs of the Los Angeles Rams, whom he torched in Super Bowl 53 with 10 catches and 141 yards. Or 30 other teams in the league that have watched No. 11 slip between their defenders, or, if you’re from Atlanta, a Super Bowl championship impossibly slip away with circus catches etched in NFL history.

More than just a football player, Edelman is, of course, one of Jewish Boston’s—and JewishBoston.com’s—favorite members of the tribe. A few months after he was named Super Bowl 53 MVP, we recorded a fascinating podcast in which he opened up about his emerging Jewish identity.

In true Haggadah form, we managed to get four questions to the Patriots veteran just before he took a weekend pleasure trip to South Florida, where he contributed four catches and 51 yards in a laugher over the inept Miami Dolphins.

Read on for our exclusive interview.

Coming off a Super Bowl championship and MVP, the release of your documentary and your second trip to Israel, is there anything unique about this off-season? What’s your goal for the season?

The goal is the same every year once we get started up. Improve every day, and make sure you are focused and ready for the task at hand. Whether that’s for a game on Sunday or on Wednesday walkthrough, it’s all about living in the now.

You’ve been known to shout a motivating “You’re too old!” to Tom Brady. Now that you’re the oldest guy on the receiving corps—and with new faces—is there any special responsibility in being “old” on the Patriots?

You always try to be a leader. But now, ya know, it’s not me who’s coming in as a rookie and the script is flipped; I definitely try to pull from the way some of the older guys helped me [and] pass that wisdom along.

You had another trip to Israel this summer. (Watch highlights from the last one here.) What stood out this visit?

The people. We spent a lot of time in Tel Aviv this time around, and it’s just one of the most vibrant cultural cities. Everyone was so great to me over there, and I really felt at home over 5,000 miles away.

The Jewish High Holidays are coming up. Do you have a chance during the season to observe Jewish holidays? I know Yom Kippur is your favorite.

This year, Rosh Hashanah falls on a Sunday, unfortunately, so it will most likely be pretty low-key. Every year though for Yom Kippur, I head up to a temple on the North Shore of Boston and go to a service with some friends.

You can catch Edelman in his recently released documentary, “100%: Julian Edelman,” on Showtime. And listen to our exclusive podcast with him here.