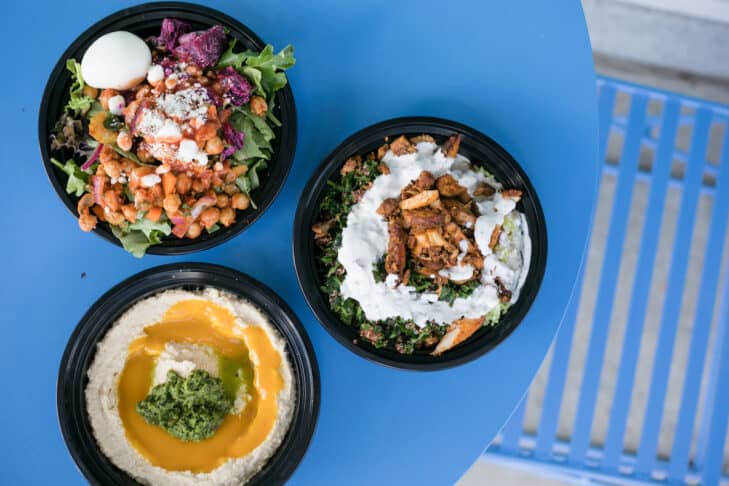 Avi Shemtov—you probably know his Israeli-American food from spots like A La Esh, Simcha and Chubby Chickpea—just opened Hummus v’Hummus at The Street Chestnut Hill. The much-anticipated, quick-service newcomer focuses on hummus bowls (naturally) with lots of fixings, but with a twist.

“I’m Avi Shemtov. I’m Jewish until the day I die and am going to be Jewish in the way I want to be Jewish. I’m not assimilating; I’m also not going to let anybody tell me that I have to dress, act or eat in any way in order to be that,” he told me a few months ago, before opening.

Now the (non-kosher, kid-friendly) restaurant is now open daily from 11 a.m. until 9 p.m. I asked him to riff on almost each and every item on the menu, from bases to proteins to toppings to sauces. Read on for the essentials before you stop by.

Saffron rice: “I feel like it’s a universal. It’s for dudes who want the big plate of rice and chicken!”

Tabouleh: “Classic Middle Eastern food: They’ve been eating grain bowls since before they were a thing. Our tabouleh is made with quinoa; it’s gluten-free.”

Hummus: “At Chubby, the hummus is a little grainier. At Simcha, it’s like butter. Here, I have an incredible food processor. It’s so creamy. It’s the only place we’re able to make it constantly throughout the day, fresh and unrefrigerated. It’s the coolest thing. People come in and we’re spinning hummus so loud. It sounds like an airplane engine.”

Mixed greens: “The thing about this concept that works is you can come in here every day to have totally different things. It’s a salad. People say: ‘Do you have a salad?’ Everything can be a on a salad. It’s a nice spring mix, with frisee and spinach and arugula.”

Chilled salmon: “We keep roasting off basil and salmon and chill it. We want to be something for everyone. It’s choose your own adventure!” 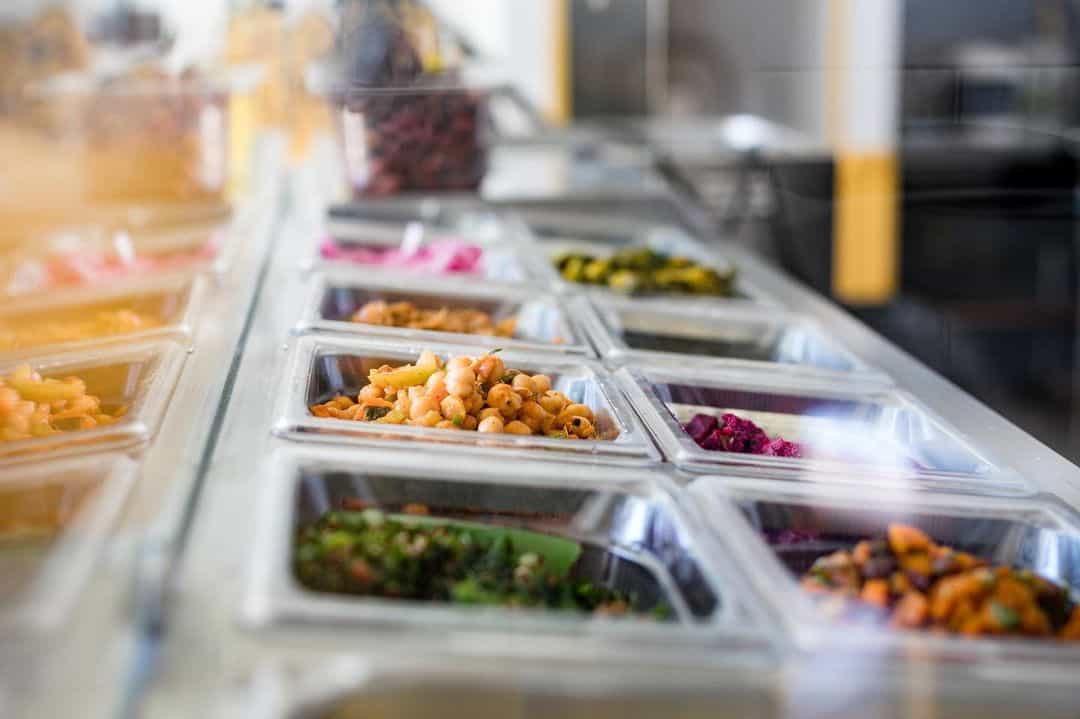 Grilled chicken: “It’s universal. It’s basic, which I don’t want to use in a negative way. It has saffron, onion, garlic. Really zesty. It’s as flavorful as the shawarma, but not as spice-heavy. It’s white meat, grilled chicken.”

Chicken shawarma: “To me, there is a classic way to eat our food. You can have a little rice or tabouleh, hummus, chickpea salad, eggplant, tahini—and, then, chicken shawarma. It’s got, I want to say, 11 spices in it. It’s very flavorful. It has a lot of sneaky spices, like clove. One of the coolest compliments I ever got was when someone told me: ‘Nice use of cloves.’

“There’s nutmeg, cinnamon, cayenne, garlic, cumin, coriander, turmeric. It’s very earthy and a little fatty because of the thighs. It’s tender. It’s very spice-heavy and works really well with the freshness of a bowl.  It hits every quadrant on the profile of flavors. It will get you all the way there.”

Lamb: “People always want lamb from us. We braise it. It’s juicier and fattier as a meat. It’s rich.”

Eggplant salad: “The best: smoked with tomatoes, onions, garlic, cooked down into a spread.”

Carrot tsimas: “It’s the sneaky star of the show. People lose their mind for this. It’s sauteed carrots, raisins, onions. One thing about Sephardic cuisine is there are sweet ingredients used in savory ways. The thing that gives me the most joy at the Chestnut Hill location is when someone comes in and is like: ‘Give me a bowl of rice with chicken, but let me try some of those carrots’ and then comes back the next day and asks for rice, double grilled chicken and three times the carrot salad. We’re opening people’s eyes.”

Beet salad: “I like to eat food that changes me as a person. [Chef] Chris is Lithuanian, and his grandma would make this Lithuanian beet salad—it has celery, beets, ricotta cheese—it’s savory, but it almost doesn’t make sense!”

Mango: “This is a sweet mango puree, not spicy.”

Pita: “Every single bowl gets a pita. The folks who make this pita, Sharonna’s in Canton, deliver ours fresh every day. They’re thick and fluffy, an Israeli pillow.”