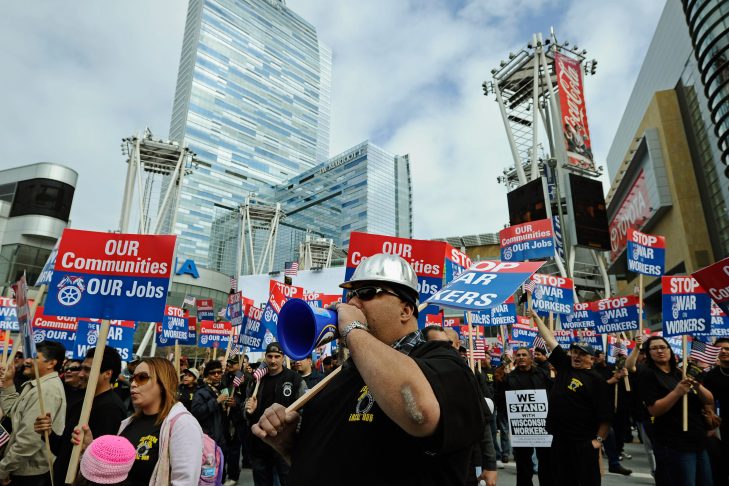 When we think of the Exodus, we recall that our ancestors were slaves in Egypt. While we often believe that slavery has been eradicated in our day, many of the same oppressive conditions under which the Israelites lived in Egypt can be found in our own country today. Workers often live perilous lives in unsafe working conditions. Housekeepers and janitors handle toxic chemicals without any protections or training. Day laborers may have their wages withheld without explanation. Hourly workers may never see overtime pay, or are forced to work “off the clock.” Without a living wage, and without basic benefits like paid leave and health care coverage, many workers today must work multiple jobs, giving up valuable time with their families.

Like slaves, many workers have no say in their working conditions. Like slaves, workers give up their dignity to serve the bottom line.

Passover is an ideal time to engage in the struggle for workers’ rights and economic justice. We can look at what is going on with people who work in all kinds of jobs, including our own. This holiday calls us to become involved in advancing the dignity of workers.

Judaism values work and workers. Go around the table: What kind of work do you do, and do you feel respected at work?

We spend much of our lives working, so it’s important that people are respected for their work, no matter their position. Respect for one’s work is demonstrated in many ways, such as paying workers decent wages, listening to how they think the work could best be done and allowing time and flexibility for people to pay attention to their families and their own health. At the Jewish Labor Committee, we understand that low-wage workers and middle-class workers are often taken advantage of, and that it’s important to stand up for all workers. We work in the Jewish community to gather support for workers.

Many people who have jobs don’t get paid enough to pay for basic needs or work in unsafe conditions. What are the ways that unions, government policy and consumer demand can help change workers’ conditions?

For the better part of a century, the Jewish Labor Committee has worked to engage the Jewish community in supporting union campaigns, legislation and consumer boycotts that have improved the lives of thousands of people. When businesses and legislators see that the Jewish community takes a stand on worker issues, it makes a significant difference. In the past year, the New England Jewish Labor Committee supported Verizon workers, janitors and Harvard University dining-hall workers to win union contracts that improved their wages, provided job security and improved or continued their health-care benefits. Currently, in the Massachusetts Legislature, we are working to pass an increase of the minimum wage to $15 an hour, as well as pass the Paid Family and Medical Leave Act to help employees when they or their family members are ill, or when a new child comes into the family.

The story of Passover teaches us that slavery is wrong. Where does slavery currently exist in the U.S. and in the world, and what’s being done to stop it?

It’s hard to imagine that slavery exists today, but it does, even in the United States—on farms, in prisons and in homes. In recent years, the Coalition of Immokalee Workers, whose work the Jewish Labor Committee has been involved with for the past five years, exposed and halted slavery on farms in Florida. There are also domestic workers across the U.S. and in Massachusetts who are not allowed to leave the households where they work because their employers have taken their passports and cell phones to prevent them from leaving. The Massachusetts Coalition of Domestic Workers, along with the New England Jewish Labor Committee, is one of the groups fighting against this.

Our criminal-justice system does not protect prisoners from working for nothing or almost nothing, producing large profits for corporations in much the same way African-American slaves worked as slaves in the U.S. before the Civil War. We have many social-action groups in Massachusetts synagogues that are working for criminal-justice reform. There are also organizations, such as the National Council of Jewish Women, who are working to stop the practice of girls and young women being taken into the sex industry against their will.

In our society, people who have different work lives than we do may be invisible to us. What might we gain, as individuals and as a society, by getting to know people who earn their living in different ways than we do?

Part of the reason our country is experiencing such a big political divide is that we don’t have much real contact with people of different socio-economic classes than our own. As economic inequality has grown, we have less easy opportunities to build relationships with people who have different kinds of jobs. Reaching out to people and hearing each other’s stories will help bridge that divide. This helps everyone feel more connected, hopeful and less alone.