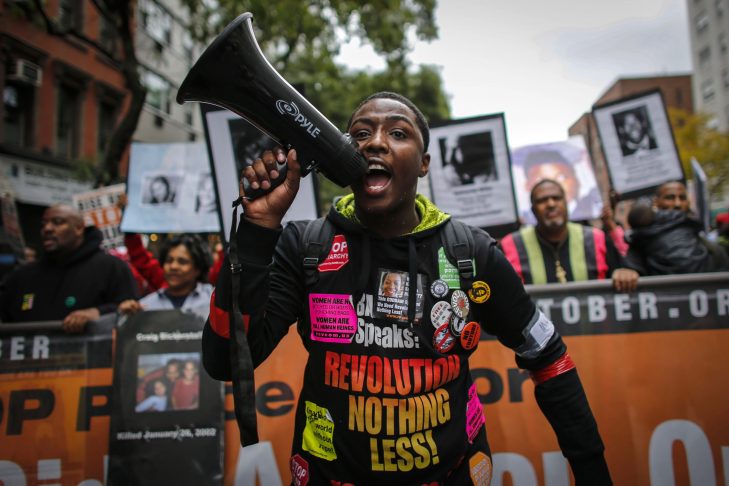 We are taught to tell the story of Passover as if each of us individually were enslaved in Egypt, and each of us individually were liberated. In that way, the work of dismantling white supremacy calls on each of us to realize we are personally implicated. It is not enough to agree with the idea of equality. Judaism consistently asks us to go beyond beliefs into action. Tonight, we ask ourselves about our own actions—and we also ask the friends, family and community gathered together at the seder about our collective actions. Situated within the racial history and racial hierarchy of the U.S., we start with questions about anti-black racism.

What are we doing to pursue the Movement for Black Lives platform?

The good news about doing anti-racist actions in the U.S. is that we don’t have to guess about what needs to be done. The Movement for Black Lives is a coalition of more than 50 organizations fighting for black liberation and for the end of state-sanctioned violence against black people and communities. The platform is divided into six sets of demands: end the war on black people; reparations; invest-divest; economic justice; community control; and political power. Each specific demand includes local, state and federal policy recommendations. Where do you have influence? What can you do to ensure that we, collectively, meet these demands?

What are we doing to support black trans women?

Mesha Caldwell, Jamie Lee Wounded Arrow, Jojo Striker, Jaquarrius Holland, Tiara Lashaytheboss Richmond, Chyna Doll Dupree and Ciara McElveen are seven transgender women of color known to have been murdered this year alone (by the time we are writing this in March 2017). Five of them were black. And there are countless more black trans women who are still alive. What are you doing to support them? They are creating beautiful art and running amazing advocacy organizations and building fiercely loving relationships and need money and jobs and housing and health care and need to not be killed by acts of racist-transmisogynist violence. They need to not be dehumanized. Trans women are women and black trans lives matter.

What are we doing to follow the leadership of black women and femmes?

Trust black women. This includes black trans women. This includes black femmes, as in people who embody femininity, feminine expression and/or femme identity. Black Lives Matter was founded by Alicia Garza, Patrisse Cullors and Opal Tometi—three black women. Tamika Mallory is a national organizer of the Women’s March on Washington. Ayanna Pressley has served on the Boston City Council since 2009. Janet Mock. Laverne Cox. Angela Davis. So many more. Listen when they speak, take in their words and push yourself to do what they are asking of you. When was the last time you did something that black women asked you to do? What are the black women in your community asking you to do? What are Jewish black women asking you to do?

Good news again—there is still plenty of guidance out there, in this case particularly for white folks trying to answer the above questions. Check this out, by Leslie Mac and Marissa Jenae Johnson, two black women activists: “Safety Pin Box is a monthly subscription box for white people striving to be allies in the fight for black liberation. Box memberships are a way to not only financially support black femme freedom fighters, but also complete measurable tasks in the fight against white supremacy.” Money raised from monthly subscriptions goes to individual black women and femmes working for black liberation. How can white people step into the roles black people are asking us to fill? What would it take for you to sign up for Safety Pin Box?

What are we ready to risk?

Ava DuVernay (another brilliant black woman) in her documentary “13th” highlights that the 13th Amendment to the U.S. Constitution outlawed slavery, “except as punishment for a crime.” As we tell the story of our own liberation from slavery, we see too that mass incarceration is slavery, and it is racial violence. Police brutality, vigilante murders and the criminalization of protests, immigration and addiction are all part of this system of abuse and control. When we say “Never again,” how can we mean it if it’s happening right now? Race-based violence is so deeply woven into our social structures that we need to deeply change our social structures in order to end race-based violence. That means now. That means urgently.

Mimi Arbeit is a sexuality educator and youth development scholar, currently a postdoctoral fellow at the University of Virginia Curry School of Education. Find her on Twitter and check out mimiarbeit.com. She loves dancing, walking by the ocean and talking about feelings.

Marc Dones is a public health social justice advocate. They run equity initiatives at the Center for Social Innovation. Read more from Marc on Tumblr and Twitter, and at the t3 Threads blog. In their spare time, Marc hangs out with their dog, rides a bike and is generally impractical. Marc’s favorite color is chartreuse.